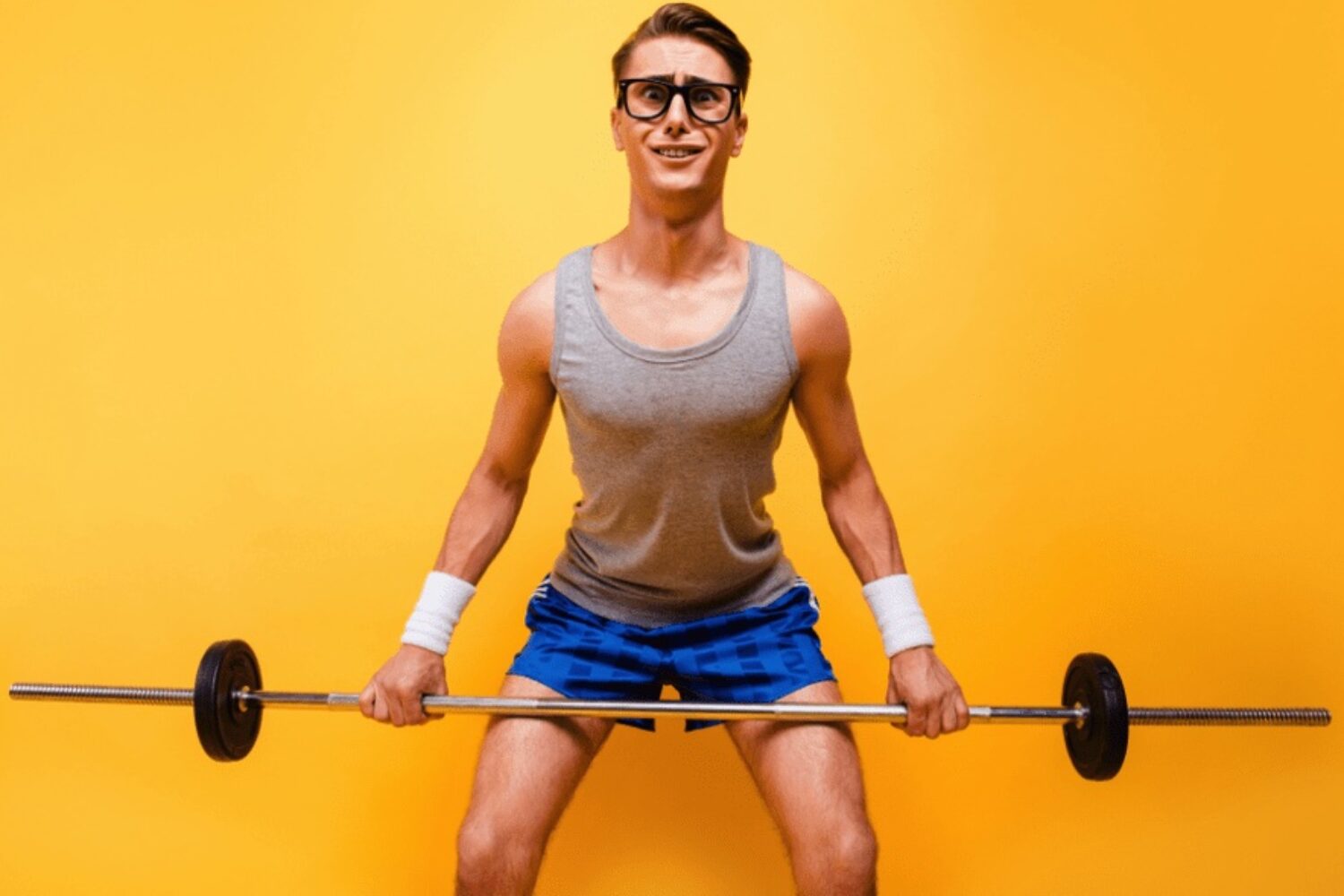 It is not too often that academics turn their ‘practically irrelevant‘ curiosity to body recomposition. But when they do, they make dumb bodybuilders look like rocket-scientists. The recent study on the ‘3/7 Method’ is a prime example of just how ridiculously moronic and irrelevant scientific research can be.

Essentially the 3/7 method combines the rest-pause training technique with the half-assed effort technique, and steals the naming convention from recently popularized 5/2 diet. Unquestionably, the marketing value of riding on the coattails of the 5/2 diet is definitely the only logical and effective aspect of the 3/7 method.

How is the 3/7 Method Superior?

So how did the scientists “prove” that this needlessly fancy set structure is a vastly superior training methodology to any other? Did they get elite bodybuilders to perform the 2 sets of 25 rest-paused reps with an inherently stressful exercise like barbell deadlifts or squats, while following a controlled nutritional intake everyday, for 12 months? No. Of course not. This study, like so many, was performed with novices doing bicep curls, twice per week, for 12 weeks, with no concern for diet or any other factor.

After choosing the most irrelevant and ineffective exercise to study, researchers used the most obvious and best way to scientifically prove that their inexplicably stupid method is better than anything that came before: they compared it to something even more drastically worthless.

So what could be more useless than a 6 minute workout, of bicep curls, with a light weight, with lots of rest, for a total of 50 reps? How about taking triple the time to lift the same weight for even less reps? Yes, the comparison group had about 18 minutes to do a total of 48 reps (8 sets of 6 reps with 2.5 minutes between).

And guess what the researchers discovered when they compared doing 50 reps in 6 minutes with doing 48 reps in 18 minutes? Doing more reps in less time – previously known as working harder – resulted in more strength and muscle gain.

guess what the researchers discovered when they compared doing 50 reps in 6 minutes with doing 48 reps in 18 minutes? Doing more reps in 1/3rd of the time resulted in more strength and muscle gain. Mind. Blown.

How Effective is the 3/7 Method?

OK, so these researchers discovered that doing moderately half-assed bicep curls is more effective than doing extremely half-assed bicep curls. But how much better? Given that the vast majority of steroid abusing, protein guzzling, lazy-volume-training bodybuilders will gain precisely 0% strength and 0% muscle mass in 12 weeks, how much could these presumably non-supplemented, non-protein-guzzling trainers gain anyway? Well, as is typical of these scientific studies, the results are head-scratchingly extraordinary.

Subjects in the 3/7 group achieved as much as a 30% strength gain, and 13% increase in biceps thickness. But even the insanely-half-assed training group increased strength by as much as almost 19% and bicep thickness as much as 9%. All this in just 12 weeks.

The inference of these sorts of results is that lifters of all strength and development levels can expect the same magnitude of progress. I have heard numerous coaches, doctors and academics argue exactly this point. So if, for example, you are a 120kg bodybuilder with 55cm (22 inch) biceps and a 100kg maximum strict barbell curl, you could be doing a strict 130kg barbell curl with 62cm (24.8 inch) biceps, in just 12 weeks, with no nutritional or pharmaceutical intervention required. Just train like a pussy on the 3/7 method and your gains, compounded for 1 year will bring your strict curl up to 285kg with 90cm (36 inch) arms. Just ‘trust the science’. It’s ‘evidence based’.

For people with functioning brains – ie people who do not ever use the term ‘evidence based’ like it means something – reading this study should immediately invoke the query: how is it possible for such obviously useless training protocols to achieve such extraordinary training results? The answer is: quite easily, in fact. You simply start with untrained test subjects, and you grossly underestimate the starting strength by using a flawed measurement method.

Lets consider the reason it is so important to use untrained test subjects in a study on ‘hypertrophy’. Anybody beginning (or resuming) any weight training will likely experience very significant muscular inflammation and swelling from just the first workout; and certainly from the first few workouts. It does not even matter how shockingly bad the training is; an acute swelling effect still results. This swelling can be measured. This swelling is obviously not growth; but it is ‘hypertrophy’. So it makes for impressive results if your job is getting funding for more studies. And nobody involved in the circle-jerk of scientific research, cares that the results are meaningless and irrelevant in the real world.

Active weight trainers cannot get the same acute swelling response from training. They can achieve some new real muscle growth and/or hypertrophy from a radical change in their regime. But it is not of the magnitude that looks impressive in 12 week studies on really crappy training protocols. So untrained subjects are much preferred for studies that are only going to be applied by experienced weight trainers, for whom the studies are completely irrelevant.

The other benefit of using untrained test subjects is that it makes it much easier to underestimate the starting strength. Let me explain why this is so important.

Consider a person whose genuine maximum strength performance capability on an exercise is 50kg. Lets say that after 12 weeks that person still only manages to lift 50kg, because they gained no strength at all; because they were following the idiotic 3/7 method.

If the researchers had recorded this test subject lifting 50kg at the start of the study, the results would reflect the honest 0% strength increase. But if the researchers had assessed the person as only being able to lift 40kg at the start, the 50kg lift at the end of the study would represent a 25% strength gain. If they managed to underestimate starting strength as being 25kg, they could report the test subject made a 100% strength gain.

Now picture in your mind, some Bill-Gates-type, pencil-neck, Poindexter, with all the athleticism of a banana in a blender, attempting to test the strength of a novice lifter. Its the blind leading the blind into a testosterone black-hole. There are no hairy backs, face slaps or blood noses at these strength tests. The only encouragement is for you to express your pro-nouns and gender identification. This is not the environment for extracting honest maximum capabilities from totally inexperienced lifters. In other words, it is the perfect environment for underestimating starting strength, resulting in the most extraordinary apparent strength gains, with absolutely no relationship to the ‘hypertrophy’. And now you know why so many studies show no relationship between strength and ‘hypertrophy’.

This study is as frustratingly ridiculous, irrelevant and needlessly over-complicated as almost every other published academic weight-training study I’ve ever read. This utter garbage is standard fare. Like the majority of research, its inapplicable nonsense.

Stupid and dishonest, shyster ‘coaches’ love ridiculous, garbage study results like this. They love that they can sound so learned and superior because they can throw around their favorite meaningless terms ‘scientifically proven’ and ‘evidence based’.

The fact is, the way to apply science to body recomposition is very simple:

In other words, to learn how to manipulate your body, you need to study – measure – yourself, and how you respond to your interventions. There is nothing to learn from studies on people who are nothing like you, doing things nothing like you do, eating nothing like you eat, being measured for irrelevant things by people who do not even understand what you want to do. And regardless of how many studies you read, or how many big words you use, you are absolutely not being at all scientific (or intelligent) if you fail (or refuse) to regularly measure your body composition and strength when training for body recomposition and strength.

Doing the work and measuring your personal response to it is the only true and relevant ‘evidence based’ research there is. Anything else is as irrelevant and useless as the 3/7 Method.